The site is undergoing technical work

Our team is a team of experts in the field of event management. We bring to life bright and ambitious own projects and always find effective solutions to the assigned tasks

Limited Liability Company “SportInvest” – was established in 1992 by Gelani Aptievich Tovbulatov. Gelani Aptievich Tovbulatov – Owner and Vice President of the Spartak ice hockey club (Moscow), President of the Spartak Cup International Ice Hockey Tournament, Chairman of the Board of Directors of SportInvest LLC. Since 1992 Gelani Tovbulatov has been involved in large public activities and charitable actions, a patron of the arts.

Our team is five people, and behind us is another 200 specialists who help us with the organization of events, design, decor, technology, catering, music and much more. There are no impossible tasks for us

What we are appreciated for

We solve urgent and extra-urgent tasks

We work responsibly, professionally and with heart

We control the event at all stages, paying special attention to details 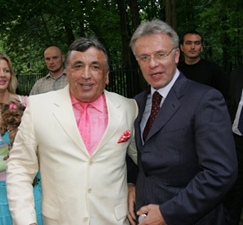 From 1994 to 2007 OOO “SportInvest” Founder and organizer of the Moscow international ice hockey tournament “Cup of Spartak”. The tournament was founded in 1994 by Gelani Aptievich Tovbulatov and Vyacheslav Alexandrovich Fetisov.

In 1994, for the first time in Moscow, the International Tournament of Club Teams – “Spartak Cup” was held. The idea to gather on the Moscow ice our leading masters who went abroad belonged to the vice-president of the Spartak hockey club G. Tovbulatov and V. Fetisov, who is still the president of this famous tournament. 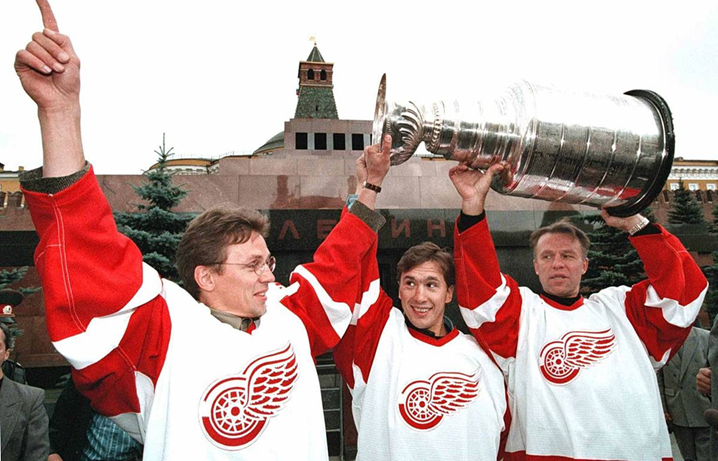 In 1997, for the first time in history, our company brought the Super trophy of world hockey – the Stanley Cup. The stay of the honorary prize at the Spartak Cup brought a positive response all over the world, raised the prestige Russia on the world Olympus. More than 100 thousand people gathered at the stadium in Luzhniki.

In 1997, for the first time in history, our company brought the Super trophy of world hockey – the Stanley Cup. The stay of the honorary prize at the Spartak Cup brought a positive response all over the world, raised the prestige Russia on the world Olympus. More than 100 thousand people gathered at the stadium in Luzhniki. 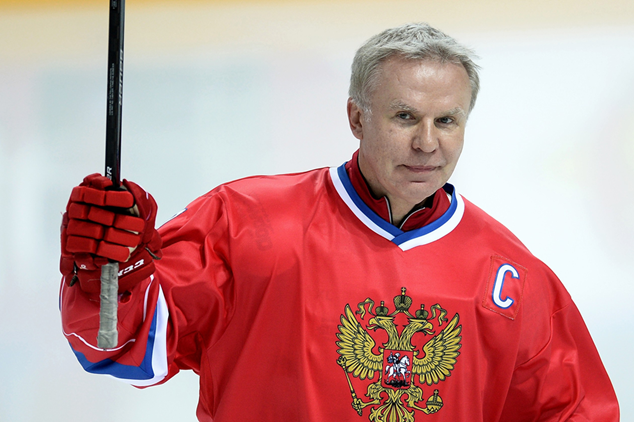 In 2000, our company was the organizer of the farewell match of the legendary hockey player Vyacheslav Fetisov 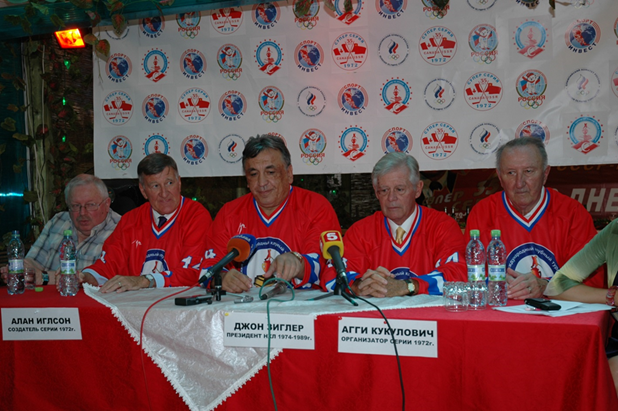 In 2002, we organized a match dedicated to the 30th anniversary of the USSR-Canada-1972 ice hockey super series. The guests of honor of the match were the organizers and participants of the super series 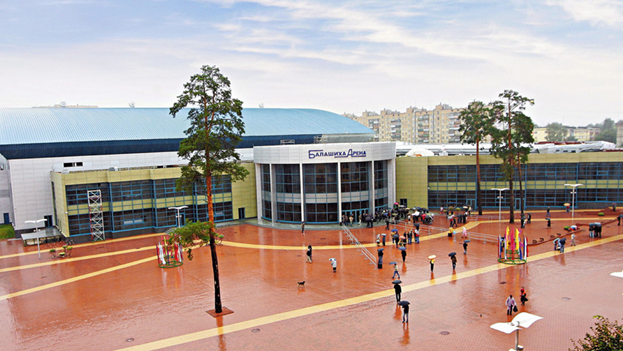 In 2004, our company began to design and build ice arenas. We have launched and implemented two projects “Arena-Mytishchi” and “Arena-Balashikha”. At the arena in Mytishchi in 2006, the Ice Hockey World Championship was held.

Partner of the Russian Olympic Committee

In 2008, our company received the status of a partner of the Russian Olympic Committee. During the XXIX –X Summer Olympic Games in Beijing, we organized the “House of Friends of the Olympics” with our Chinese partners. The project was implemented on the territory of the “Chateau Laffite” The participants of the festival and the House of Friends of the Olympics were Olympic champions, pop stars, journalists and politicians

Days of Moscow in Pekin

In 2017, on behalf of the Moscow government, we organized the Days of Moscow in Beijing festival. The culmination of the festival were figure skating demonstrations. Russian figure skating stars were represented by our permanent partner Tatyana Navka and Petr Chernyshov 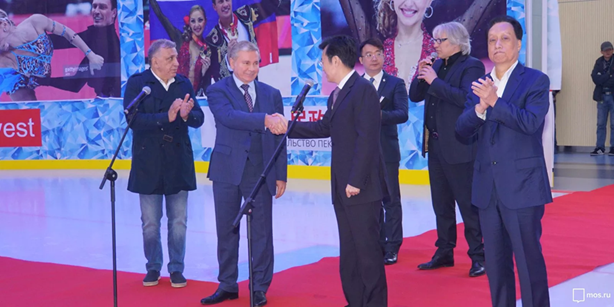 In 2018, we signed a cooperation agreement with ICESTAR GROUP Huaxing Academy. With our Chinese partners, we held a hockey camp and seminars for coaches in Beijing. The head coach of the camp was the Olympic Champion, Honored Master of Sports, Honored Coach of the Russian Federation Mikhail Vasiliev. The head of the coaching seminar was Professor, Candidate of Pedagogical Sciences, Head of the Higher School of Coaches of the Russian State University of Physical Culture Dmitry Cherenkov

In 2017, SportInvest started designing the multi-functional sports and entertainment complex Zvezdny Ice. The best Russian companies were involved in the design

In 2019, a meeting was held with the mayor of Bodrum city, Mr. Ahmet Aras, and our project was brought to life. A working group was created, a land plot was allocated. In 2020, geodetic and geological prospecting began, the project was tied to the site

With the support of the Russian-Turkish Business Council and personally Mr. Akhmed Palankoyev, our project was included in the Russia-Turkey intergovernmental negotiations. In September 2018, with the support of the International Business Promotion Center and personally Mr. Adam Lyanov, negotiations were held with the Mayor of Antalya Mr. Mukhittin Bochek. Antalya Municipality highly appreciated our project and proposed to create a working group for the construction of the center in Antalya

The annual holding of the tournament has received wide recognition, support and appreciation not only in Russia, but also in the IIHF. It was included in the International Calendar of Official Ice Hockey Competitions. The guests of honor of the tournament were the Presidents of Russia B. Yeltsin and V. Putin, Prime Minister V. Chernomyrdin, Prime Minister of Ukraine V. Yanukovych, Mayor of Moscow Y. Luzhkov, representatives of world hockey: President IIHF R Fazel, Secretary General of this organization Yan-Oke Edwinsson and NHL Commissioner H. Bettman. The Moscow International Tournament “Spartak Cup”, deservedly was one of the most popular and honorable for participants in international competitions, traditionally attracted a lot of attention from fans, the media and the hockey community. In 1997, for the first time, the Super honorary trophy of world hockey, the Stanley Cup, was brought to our country. The stay of the honorary prize at the “Spartak Cup” brought a positive response all over the world, raised the prestige of Russia on the world Olympus. Thanks to this tournament, of which the “Stars of Russia” team was a constant participant, hockey fans were able to meet such famous compatriots as V. Fetisov, I. Larionov, P. Bure, V. Kozlov, A. Mogilny, S. Fedorov, A. Zhamnov. S. Nemchinov and others. Another good tradition is inherent in the “Spartak Cup” – every year, within the framework of the tournament, a friendly match between the stars of the current generation and veterans of Russian hockey is held. Spectators can simultaneously watch the play of heroes from different eras – as if the whole history of hockey is concentrated on the ice of one hockey rink. The veterans’ national team was represented by: A. Yakushev, V. Zinger, V. Starshinov, V. Shalimov, V. Anisin, V. Vasiliev, V. Petrov, A. Maltsev, Brothers Golikovs, A. Sidelnikov and many others